Poland, 1978. Lives Petrovaradin, Vojvodina, Serbia.
Currently she is a student at the Academy of Arts in Novi Sad, Serbia (MA in Light Design) and also PhD researcher at the Academy of Arts, University of Castilla la Mancha in Spain.
Her interest and background revolves mainly around light. For her, the space created by light can experiment and increase its dimensions with the use of new technologies, improvisation and sometimes through the act of mishap.

Blackout is an art action for the environment.
In 2007 the World Wide Fund for Nature began a global campaign called ‘Earth Hour’ to encourage people from around the world to turn off the lights for one hour, aiming to save our planet and to take action on climate change. This action was announced by the media from all over the world.
Blackout is a synonym for “turn the light off” and is an art project in which we replace means of comunication for natural resources to remind people about saving energy.
Changes occurring on the earth and in the sun can affect the intensity of the sunlight that reaches earth’s surface. Blackout is a project which determines new ways of comunication where the natural light requests help for the earth.
It is about the use of natural energy as an element of artistic intervention to increase global awareness of the energy problem. 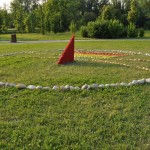