Haifa, Israel, 1990. Lives and works between Milan and Verona, Italy.
She graduated in Painting and Visual Arts at NABA-Nuova Accademia di Belle Arti in Milan
where she is currently enrolled the MA in Visual Arts and Curatorial Studies.
Her work focuses on past traditions that are changing in the time and space. Re-create new imaginary drawing based on the collective memories.

In this work two imaginations are joined: the first is that of a human being who is resting under a tree, and the other is a beach with umbrellas.
With this dichotomy, the artist wants to emphasize the contrast between the natural and the artificial, and between the trees and the umbrellas. To recreate the shadow she has decided to use 12 umbrellas (like the 12 projects that participate to Ecoismi) typical from the beach, then she will install and cut into each of the umbrellas the sentence “L’ombra l’ hanno inventata gli alberi”. The umbrellas can be used by the visitors as shelter from the sun, and at the same time to reflect on the function of the trees that surround them. 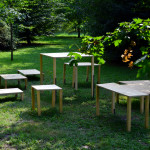 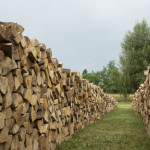